Have you ever been at lunch and received an emergency email from your CEO to create a new user so they can be up and running immediately?

In this connected, real-time world, there's no reason why you have to leave a perfectly good lunch to go online and create a user when you can create one from your mobile phone in two minutes or less.

I wrote about cloning users last year. It's the fastest path to creating a new user and follows a simple premise that new users are similar to existing users. Therefore existing users can be used as a template for creating creating new users.

Arkus made this incredibly easy with Clone This User, a mobile app built on the Salesforce1 platform that takes the fewest number of inputs to clone a user so they can be up and running immediately. 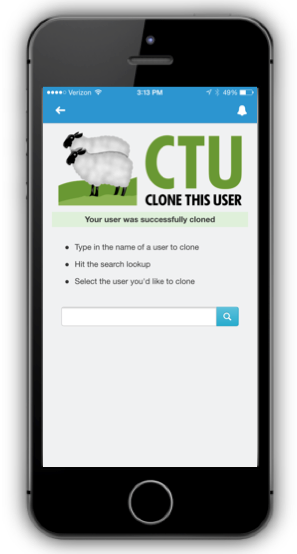 This app came up in several conversations just the other day.

The second use case was around a custom user provisioning app built on top of the API. The custom app asked the administrator cloning the user to pick and choose additional permission sets above and beyond what the template user already had. This somewhat defeats the idea of a clone since now the administrator has to go back to the difficult task of figuring out all the permissions a user needs to get up and running. This created additional decision points for the administrator during what should have been a time savings workflow of cloning a user.

Cloning users with Clone This User is a great way to simplify the workflow of creating new users, even when you're at lunch.
Posted by atorman at Friday, April 17, 2015